Jewelry stores, florists, fancy restaurants, and Hallmark have dominated traditional Valentine’s Day marketing for decades. With the integration of social media into our everyday culture, companies are finding ways to win hearts with a little planning and no expense.

To inspire your own Valentine’s Day campaigns, we’re dissecting two popular social media trends and sharing examples of good, better, and best for each.

Since the invention of the Share button on Facebook, companies have been promoting cute puppies, hearts, flowers, and other traditional Valentine’s Day images in hopes that you will want to share it with your friends.

In the past few years, numerous brands have spent money designing customizable valentines on their websites and Facebook pages. They often have a few graphics and messages to choose from, and a place for you to write a custom message. Users are encouraged to share or email the picture with the ones that they love. These customizable valentine images are often paired with an entry into a contest or a discount on merchandise as an incentive to share.

We’re more fond of the type of campaign Snuggle Fabric Softener did last year with their “Share a Snug” promotion. They recorded a video with their cute bear mascot that included over 400 names that you could customize so the bear would say your Valentine’s name in the video. There were five video styles to choose from. These messages were shareable via email, Facebook, and Twitter. Having the ability for the spokesbear to say the name (if fairly common) of the one you want to snuggle made this video more enticing to share. 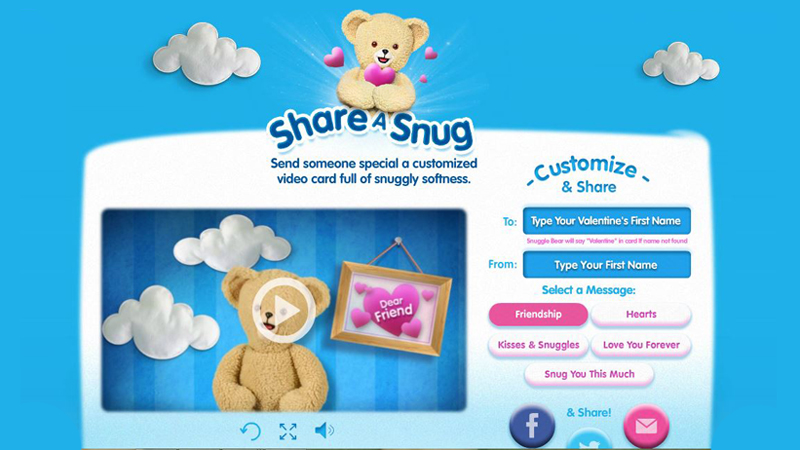 Taco Bell really set our hearts on fire last year with their Valentine’s Snapchat campaign. Instead of creating a small message to be shared, or a video with limited customization possibilities, they encouraged creativity on their Valentine’s cards. 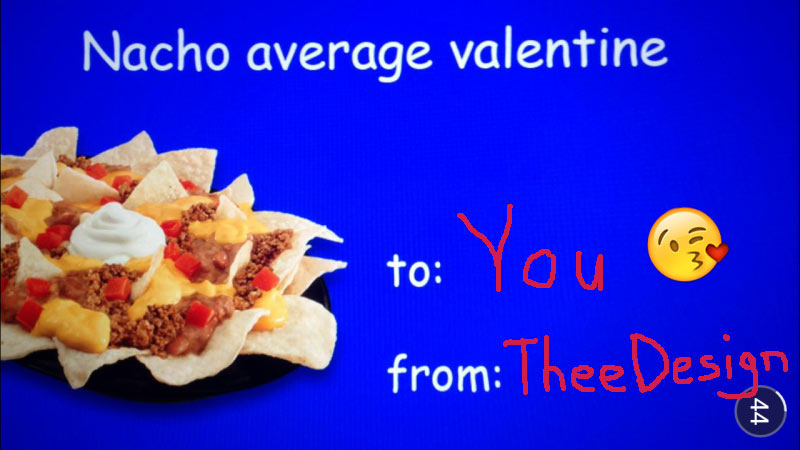 Taco Bell created simple valentine cards on Snapchat with a space open for “to:” and “love:”. For most brands, that’s where the interaction would end – they would post a picture to their story that users can enjoy within 24 hours. But Taco Bell went a step further and told their friends to screenshot the image, write, color on, or add emojis to it, and share it with their own friends. They even included basic instructions on how to do so in a fun emoji filled way. This gave the promotion legs that lasted well beyond the initial 24 hours when their story was shown.

Many companies are jumping on the “upload your own picture” bandwagon for Valentine’s Day. Encouraging your fans to share a selfie of them and their sweetheart can easily boost your engagement. The question that arises from these promotions is if your user is in love with your brand, or just loves to share pictures of their beau?

This year the cosmetics company Revlon made a “Love Is On” microsite where you can upload a picture of you and your sweetie for a chance to have your picture featured in Times Square on Valentine’s Day. They customize your picture into an animated gif with hearts in the background that’s fun to watch and share.

We’re over the moon about Mashable’s 2013 “Valenvine” campaign. They took user generated content beyond the common submit-your-picture idea and made it so visually interesting that some of the submitted videos went viral.

Mashable chose Vine for their campaign, knowing that shorter videos are actually more likely to be shared and viewed due to limited attention spans. They challenged their audience to record a six-second Valentine’s Day mini-movie and share it using the already popular #valenvine hashtag. Mashable promoted their favorites on Twitter and included a shout out to them on the blog on their website.

Here’s the one we loved the best:

Need help implementing an amazing valentine’s day campaign for your business? Our Raleigh internet marketing team is dedicated to creating creative and lead-generating social media campaigns for businesses big and small. Call our team today at 919-341-8901 or schedule your free, no-obligation consultation today!