The very first North Carolina State Fair was first held in 1853. It was just 4 days long and had a max of 4,000 visitors on a given day. And in 1873 the fair moved to it’s current fairground location in Raleigh. Since then, the fair has grown in size and attendance each year and so has its marketing budget! For the first time in 22 years, officials extended the length of the fair to 11 days. This is most likely where the 2008’s motto “Take Time for a Great Time” came from. I especially love the subtle use of the hour, minute, and seconds hands, making the logo into a clock. 2009’s state fair motto was “A Whole Lotta Happy” to emphasize all of the new rides and attractions that had been added. That year also saw a WHOLE lotta canned food donations as fairgoers donated a record 222,956 pounds of food on Food Lion Hunger Relief Day benefiting the Food Bank of Central and Eastern NC. 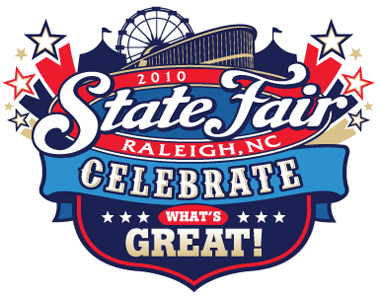 In 2010, North Carolinians were definitely “Celebrating What’s Great” because the fair set a record-breaking attendance of 1,091,887 people! With all the bad press about poor American diets, the fair focused their marketing efforts on what seemed like an attempt to highlight the healthier side of food offerings from their vendors. They also pushed the idea that the state fair comes but once a year, so it’s ok to splurdge on those deep fried oreos, and flavored pork skins… This year’s NC State Fair in Raleigh has the motto “Bumper Crop of Fun” to tie-in with their 2012 web design contest with the theme “Discovering Local Foods.” The logo design ties in elements of farming while having a nice vintage appeal as well (both popular design elements for multiple industries this year).

Interested in design? Contact the web designers at TheeDigital in Raleigh, NC at 919-341-8901 or schedule a consultation.